We recently celebrated Dresden's birthday.
Now he is 5, and it really does seem like we crossed some magic line and things changed.

On Dresden's actual birthday, we had a family day. Dad stayed home from work and we did special things-  all focused on the birthday boy.
we opened presents…which were carefully chosen. He got a Davy Crocket costume, a real canteen and  new cowboy boots. We also went to see a movie. It was Dresden's first movie theater experience! He really enjoyed it. Afterward we had a cowboy dinner and cupcakes. 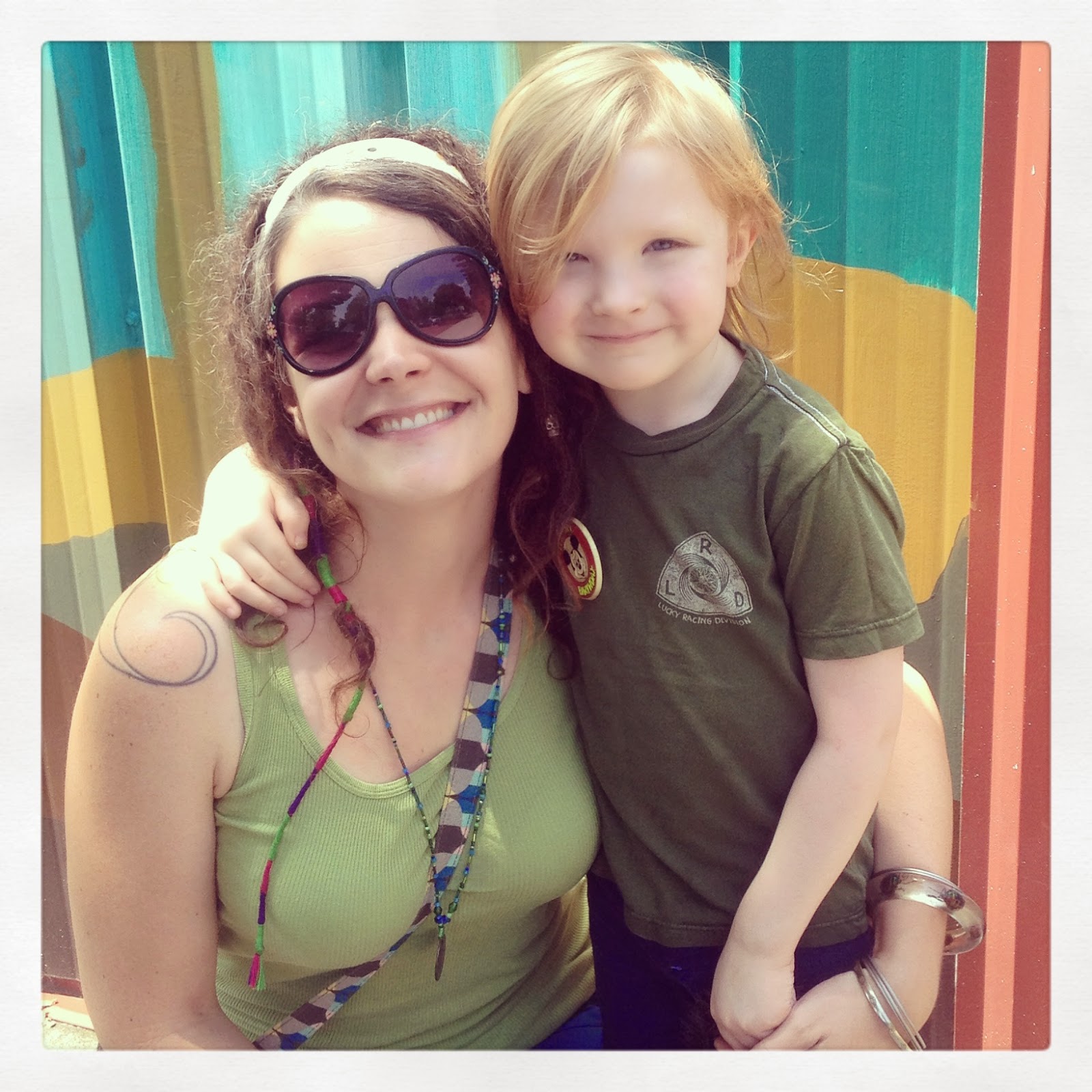 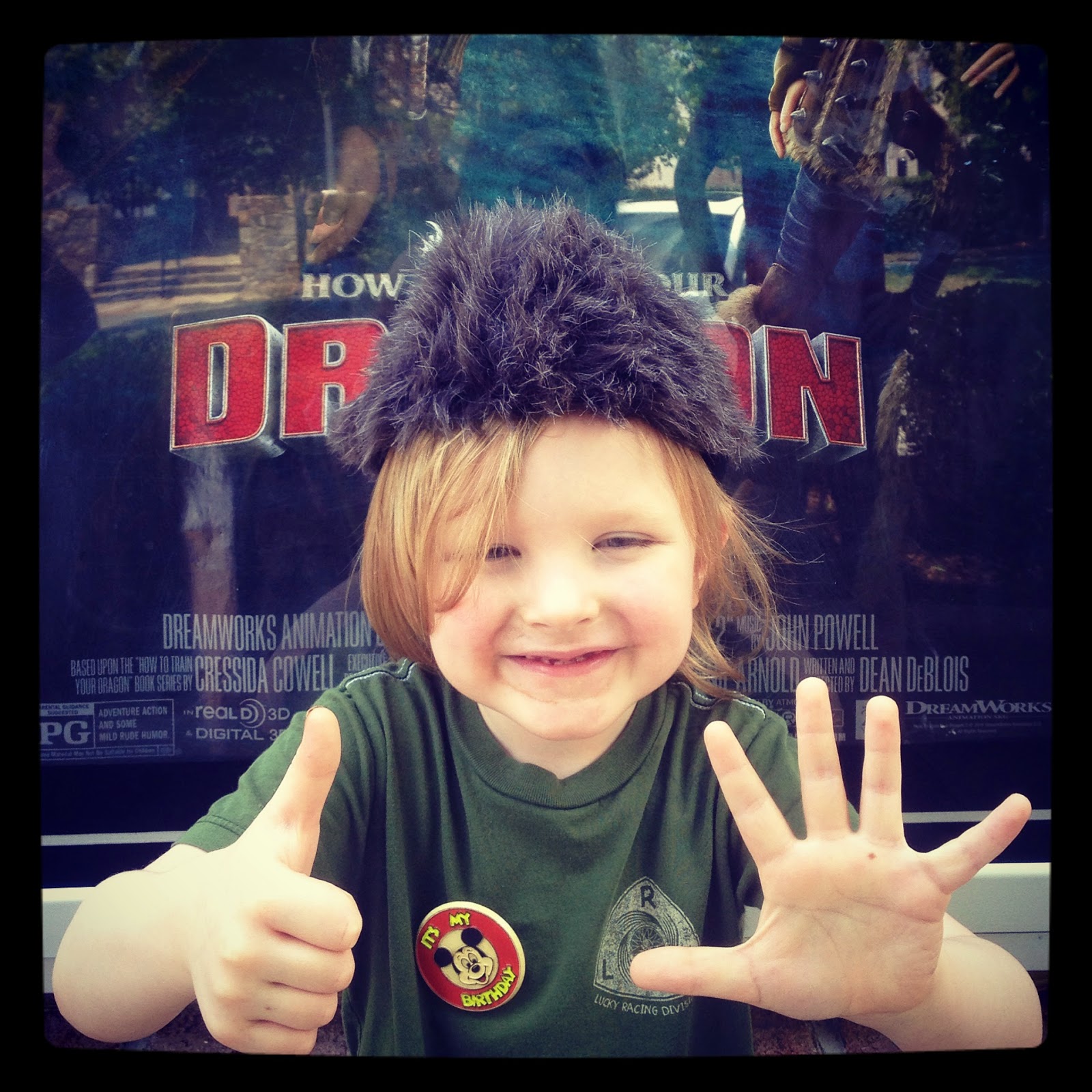 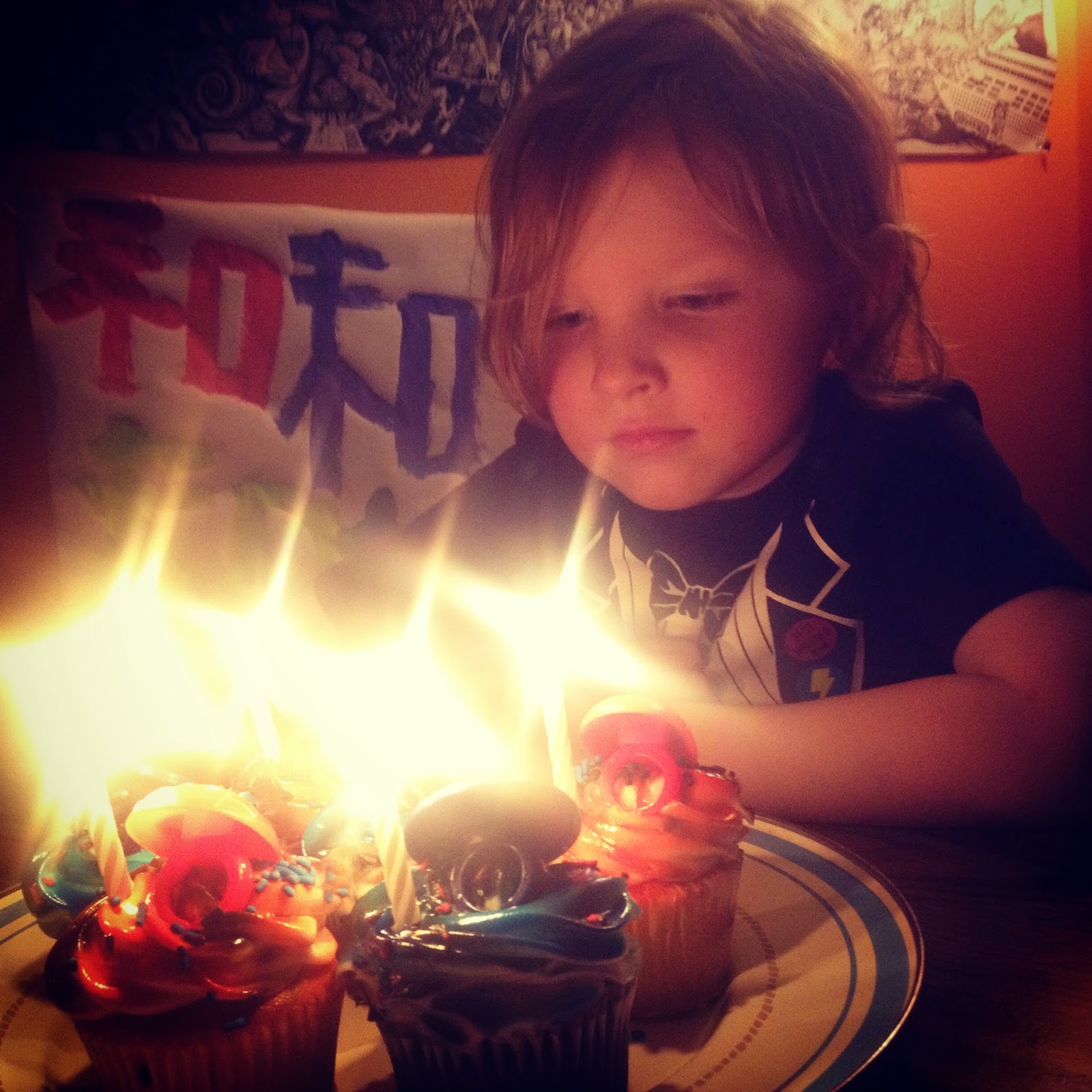 I feel 5 is the first year where a real birthday party can be enjoyed. Until 5 we only have family birthday parties. I had planned a cowboy themed party and invited 4 of his friends. We were going to pan for gold in his sandbox, have a lasso contest, watermelon seed spitting, cowboy hot dogs and beans (by D's request) and a piñata (also by D's request) with Ice cream and cake and stick horses as party favors. Unfortunately the 2 kids we knew best were out of town and 2 people never rsvp'd so a week out from the party in great fear that my little guy would be waiting for guests that never show, I decided to cancel it and come up with another plan. Our alternate plan far outshines the birthday party plan! So we went to Tweetsie Railroad in Boone for the weekend. It was THE BEST cowboy themed birthday party and I didn't have to plan any of it. Stress free and so much fun!!

We rented a little 12x12 cabin at Flintlock Campground. It was perfect for our cowboy weekend. I was very happy with the campground- in all my years living there I had never ventured on it's grounds. It was a nice discovery. We unpacked and made the place cozy, enjoyed a cowboy dinner that included homemade pickles from the garden. They were so good Phae and I drank the juice. Yum. We read about cowboy, old west, and railroad history before bed and slept to the sound of rain on the roof and the creek bubbling in the background. 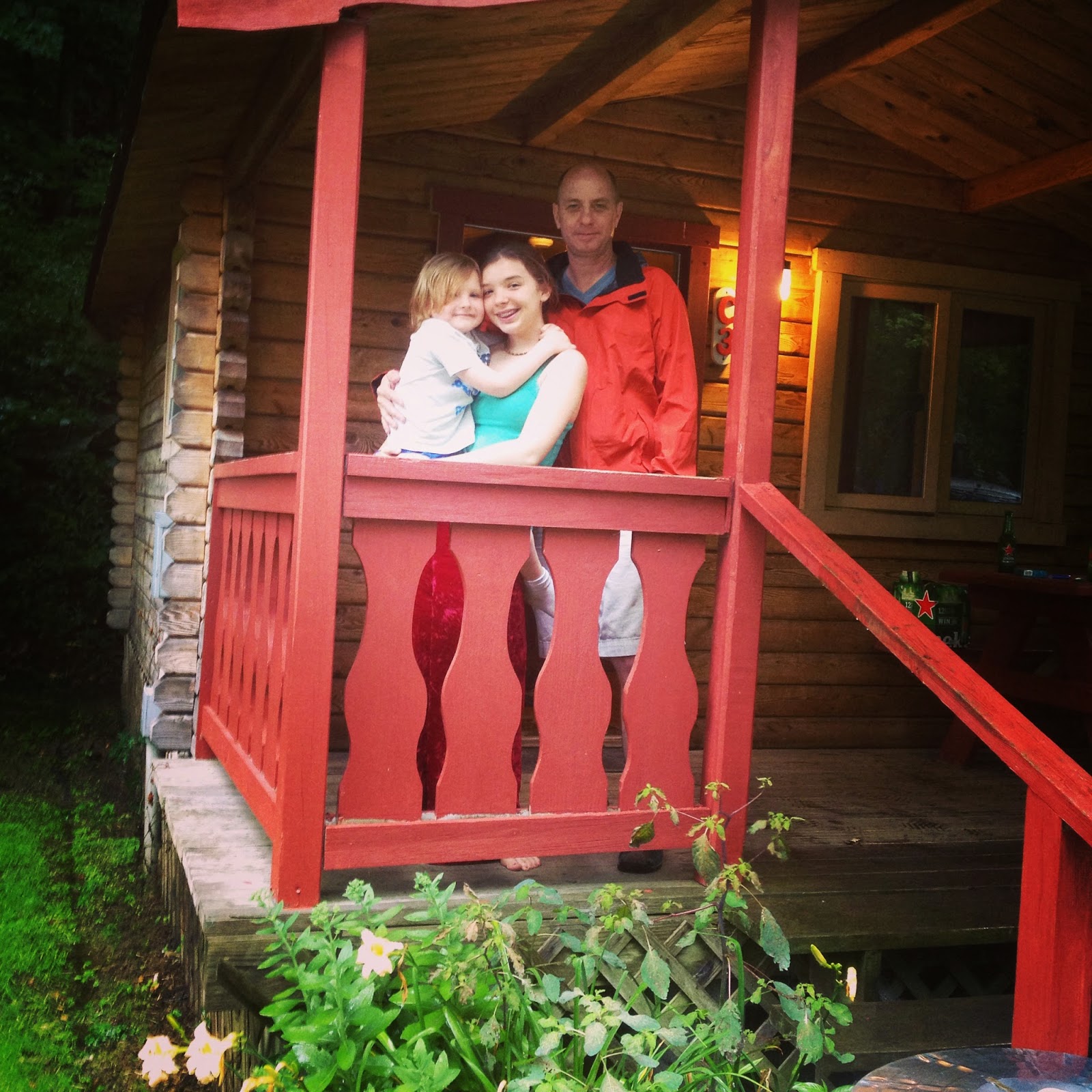 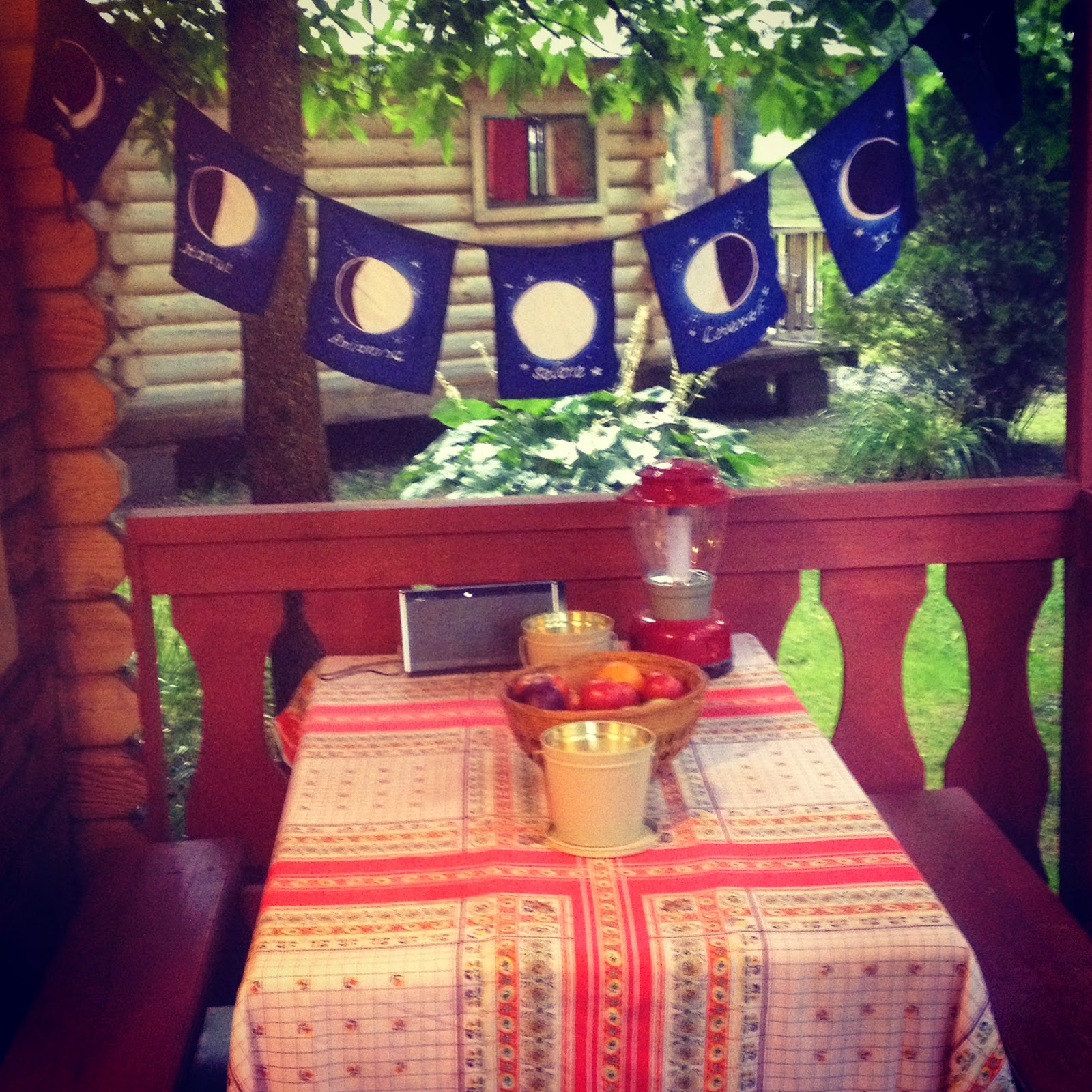 The next morning we awoke early and had a quick breakfast of oatmeal and coffee. We headed out in the steady drizzle of rain to be at Tweetsie when the doors opened. Dresden was dressed in his cow boy attire and was looking quite sharp. 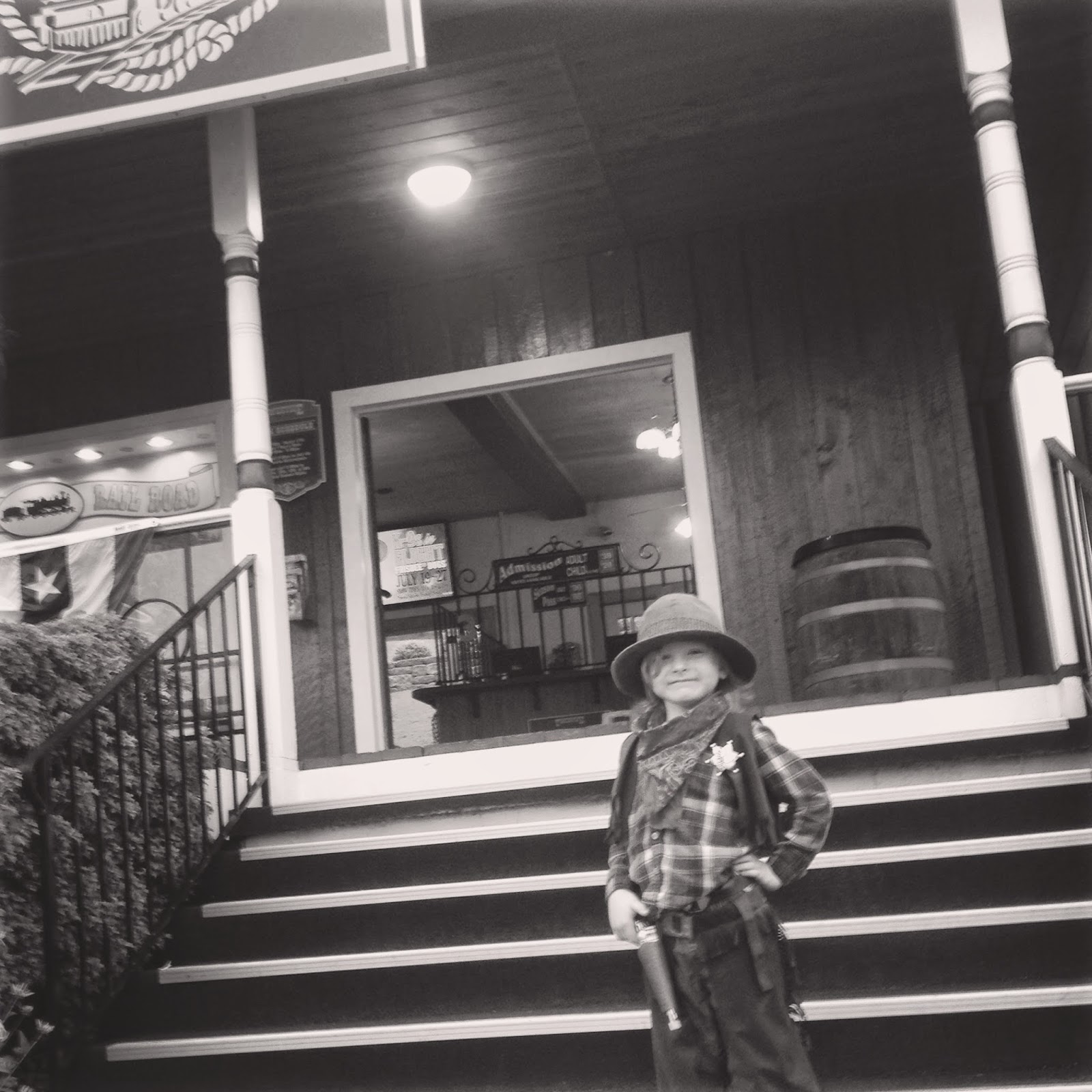 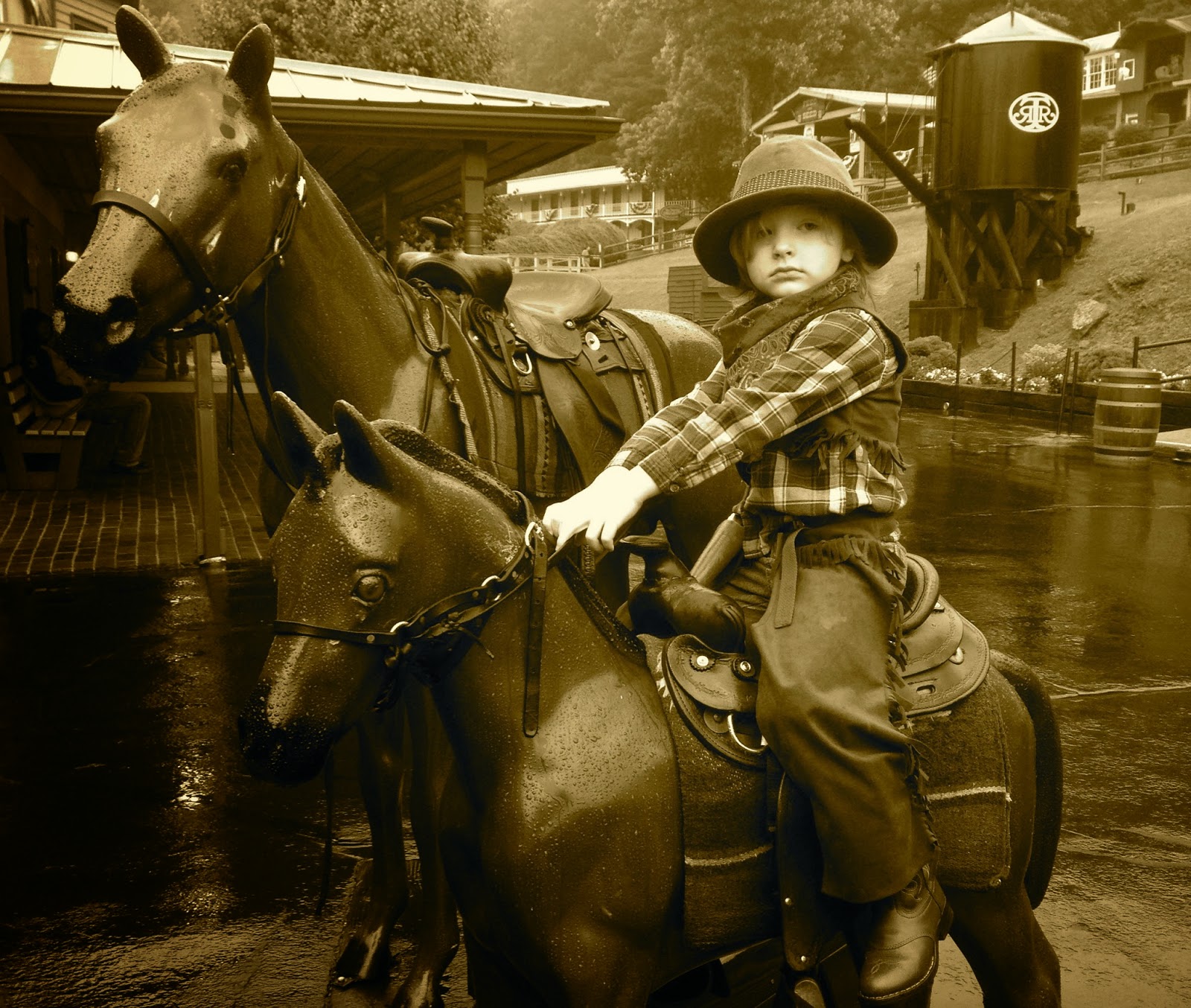 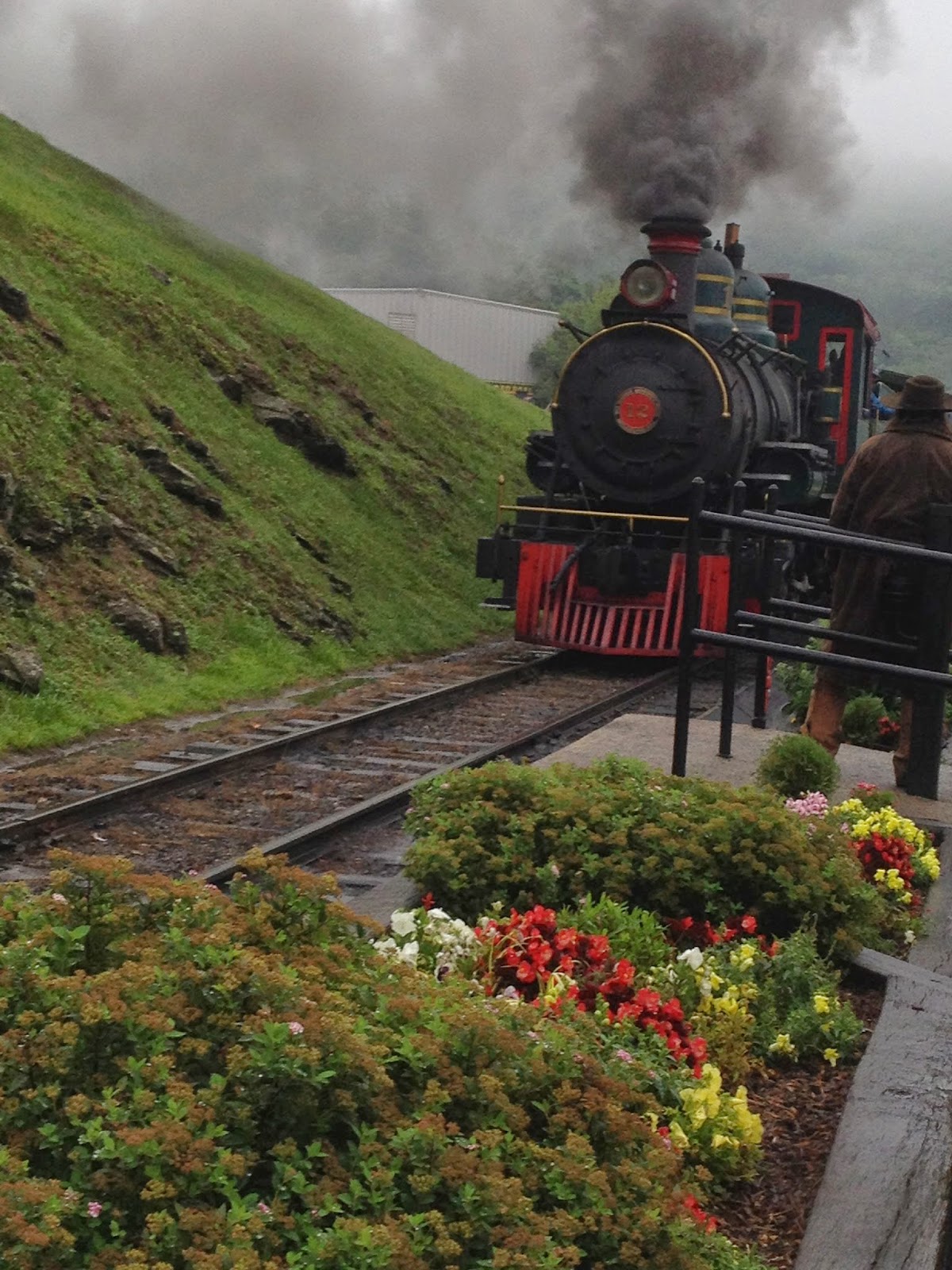 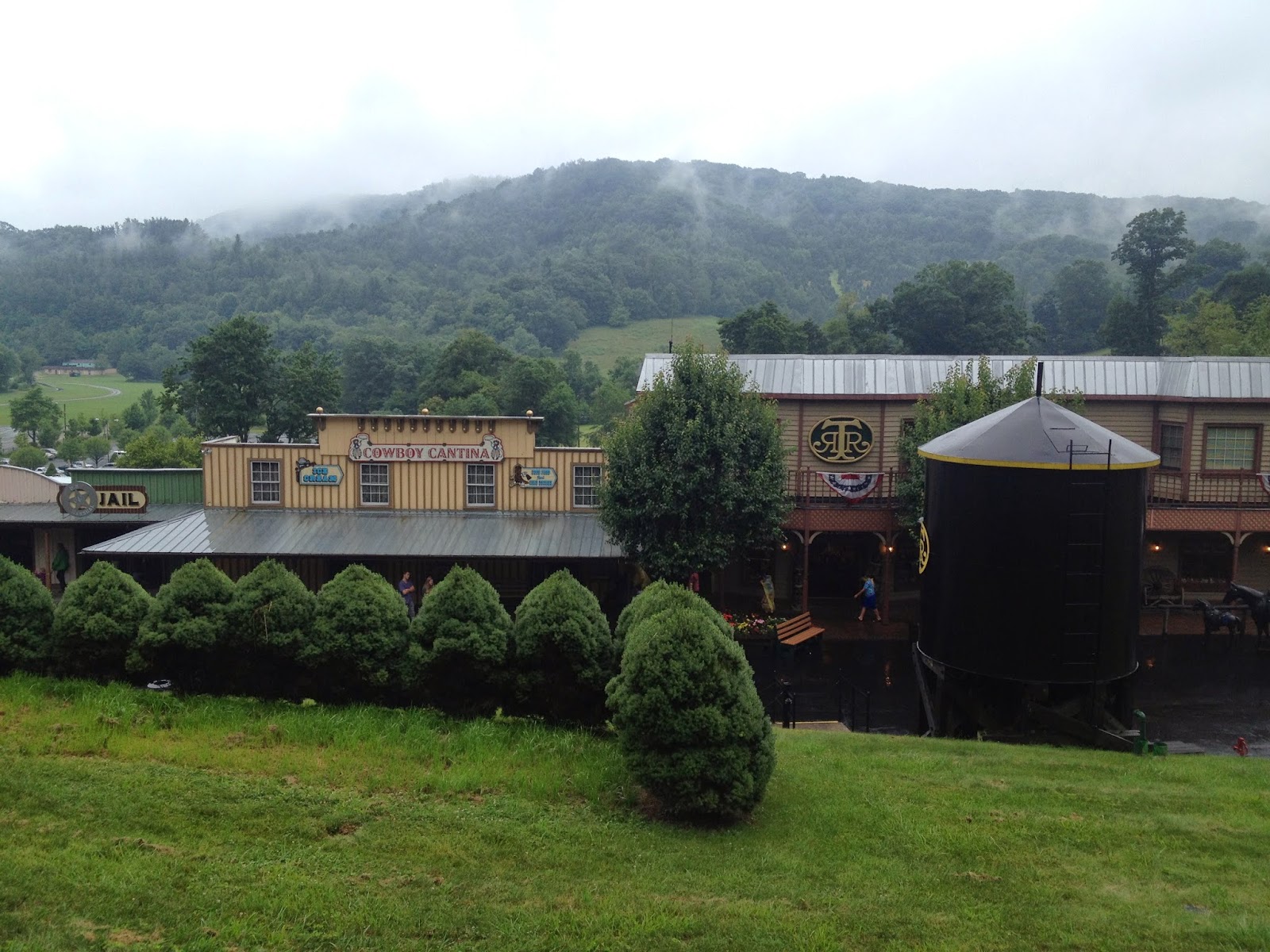 I'll admit it, as the first train pulled up and sounded it's whistle, I got a little misty and nostalgic. My first apartment was very close to Tweetsie and the whistle really brought back memories. My 13 year old daughter came at about 4 years old and seeing D's face light up like hers did (and my little brother's when we first moved to Boone when he was 4) was pretty special. Tweetsie is a treasure in all it's cheesy glory. And somethings never change:
the animatrons and mannequins still freaked us out 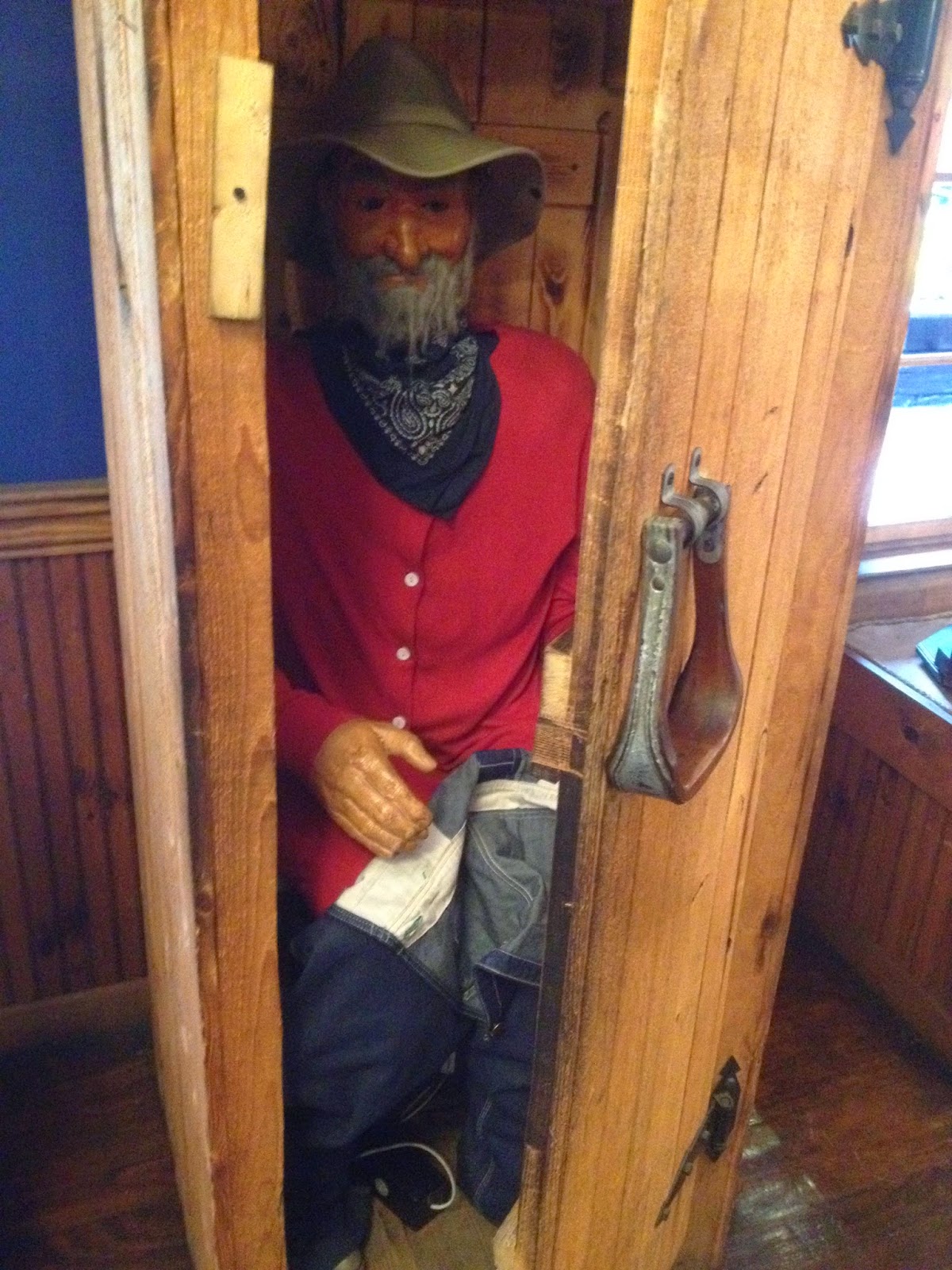 My old friend still drives the train, and another friend from college is apparently still wanted for a murder he committed. 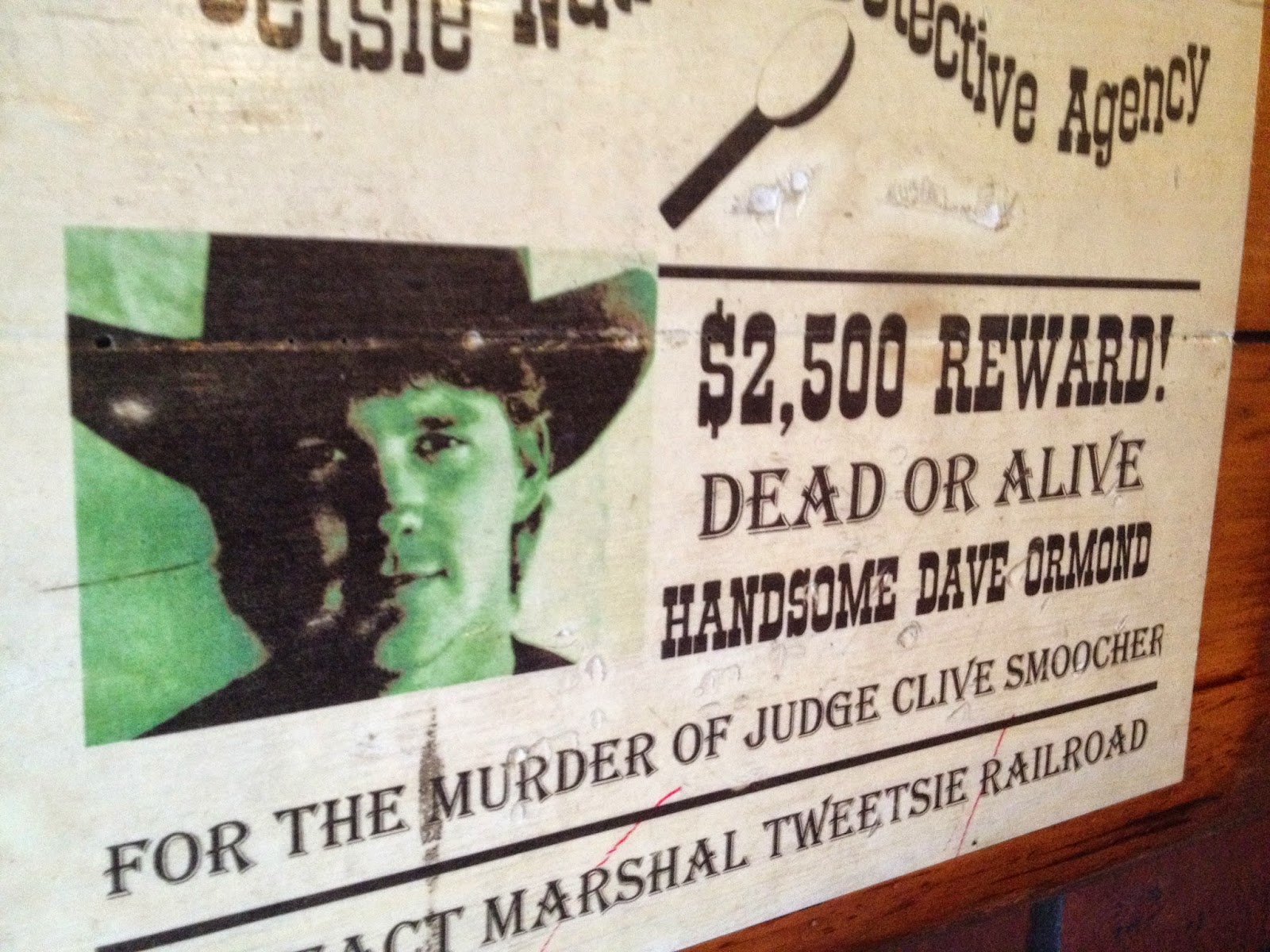 We did everything there was to do at Tweetsie. We didn't let the rain damper our fun, and not only did we participate, but we participated to the extreme.
Dresden got on stage and we all did the locomotion and the Hopper dance 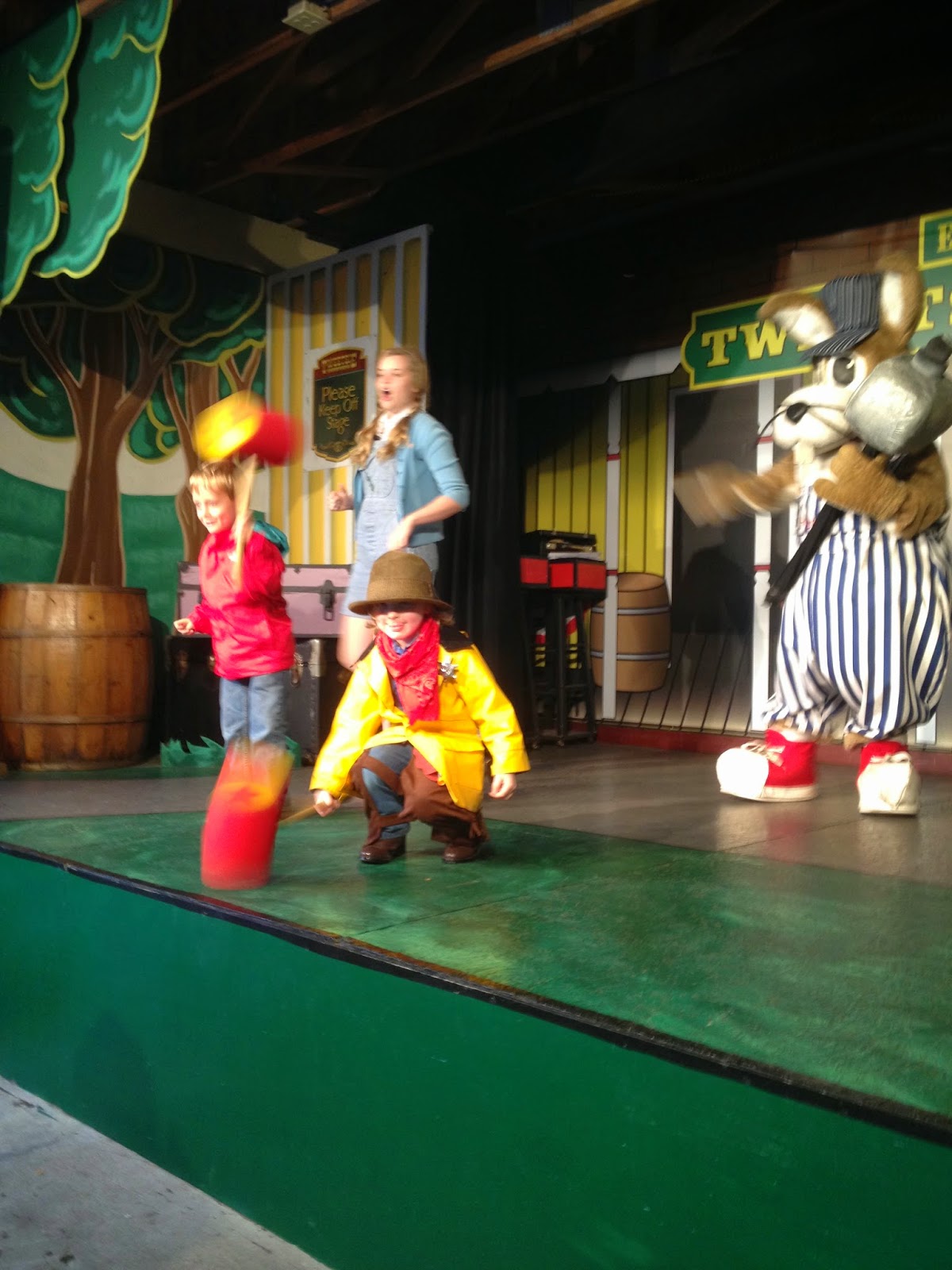 We posed for pictures 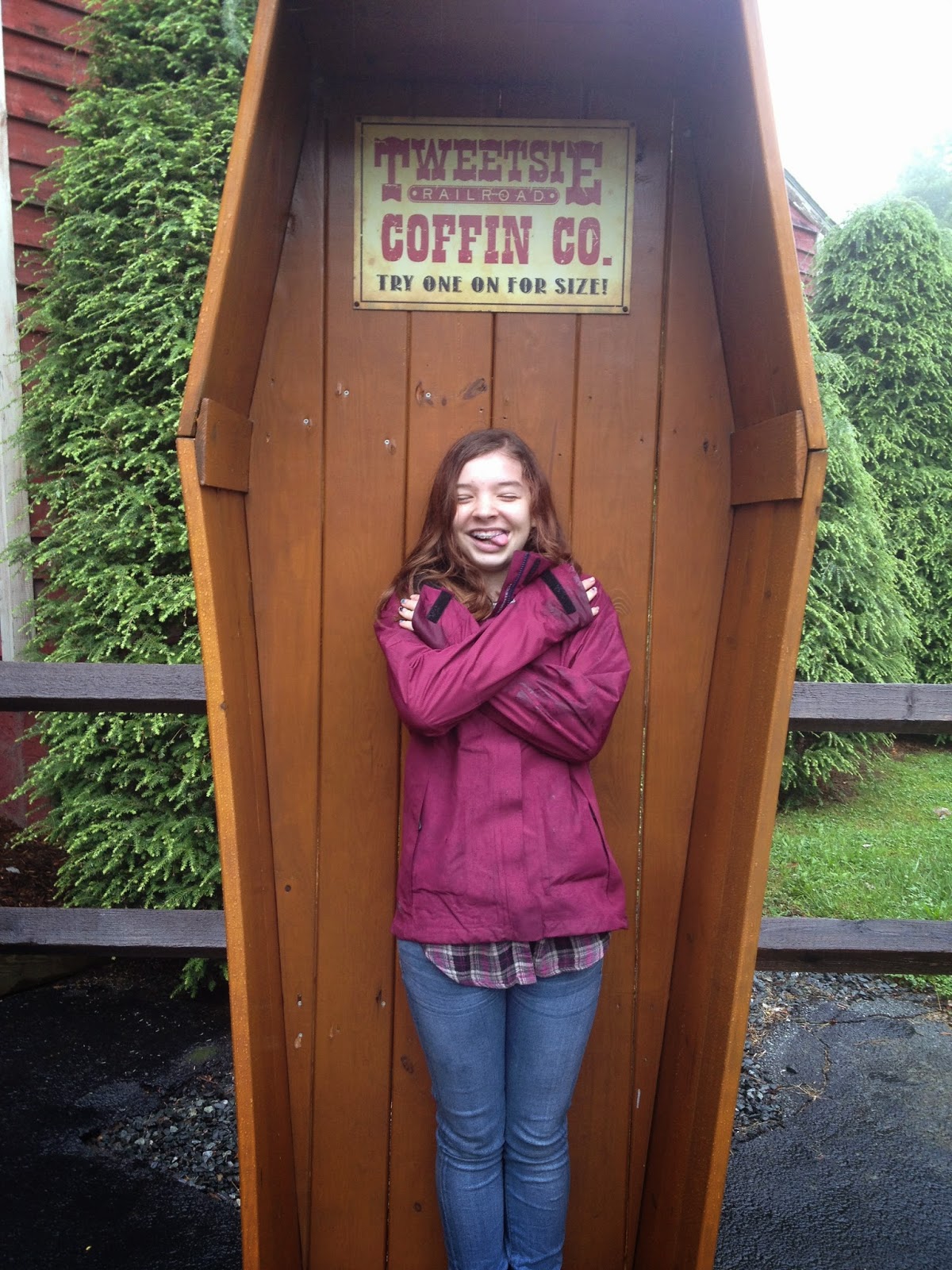 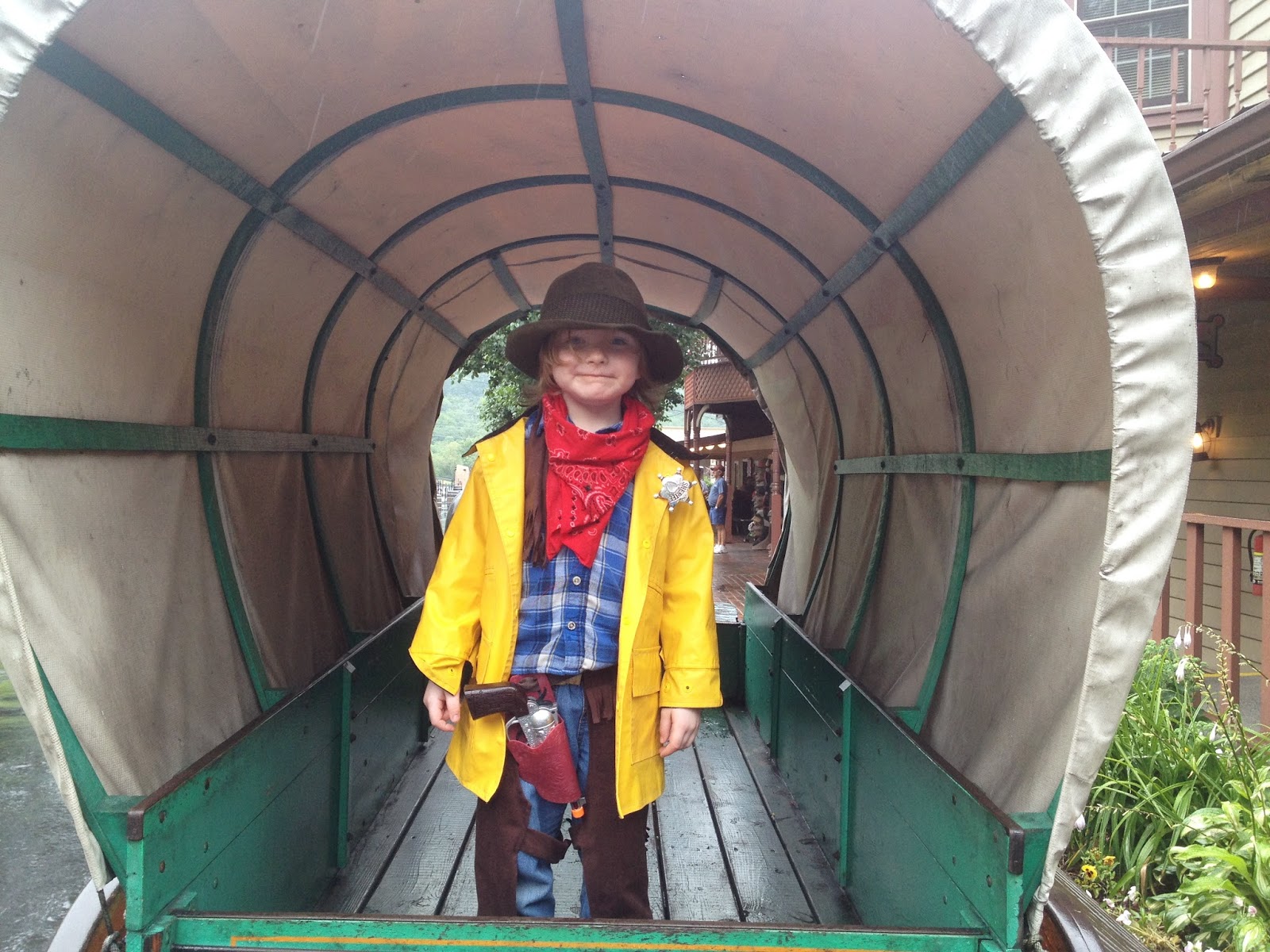 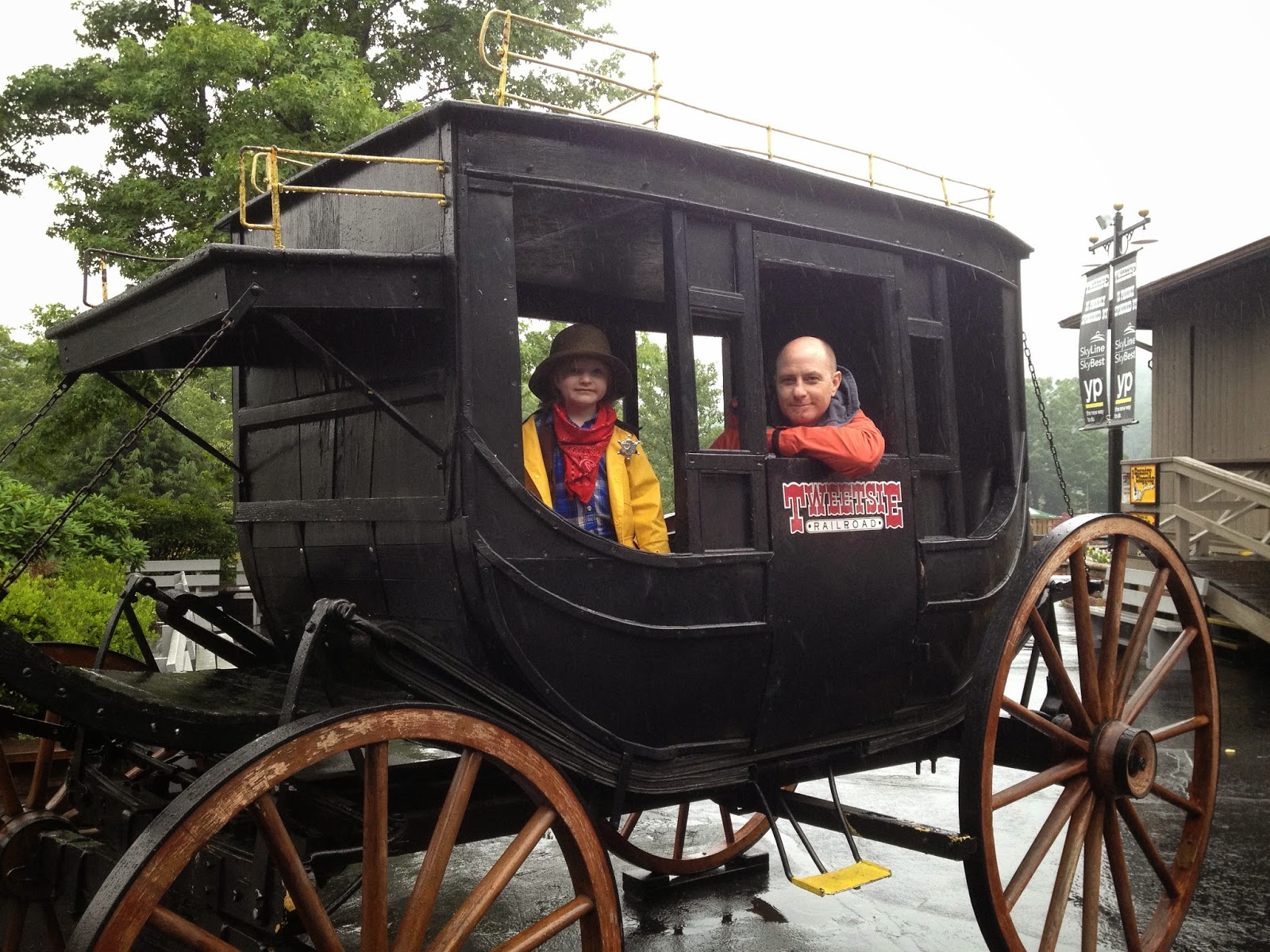 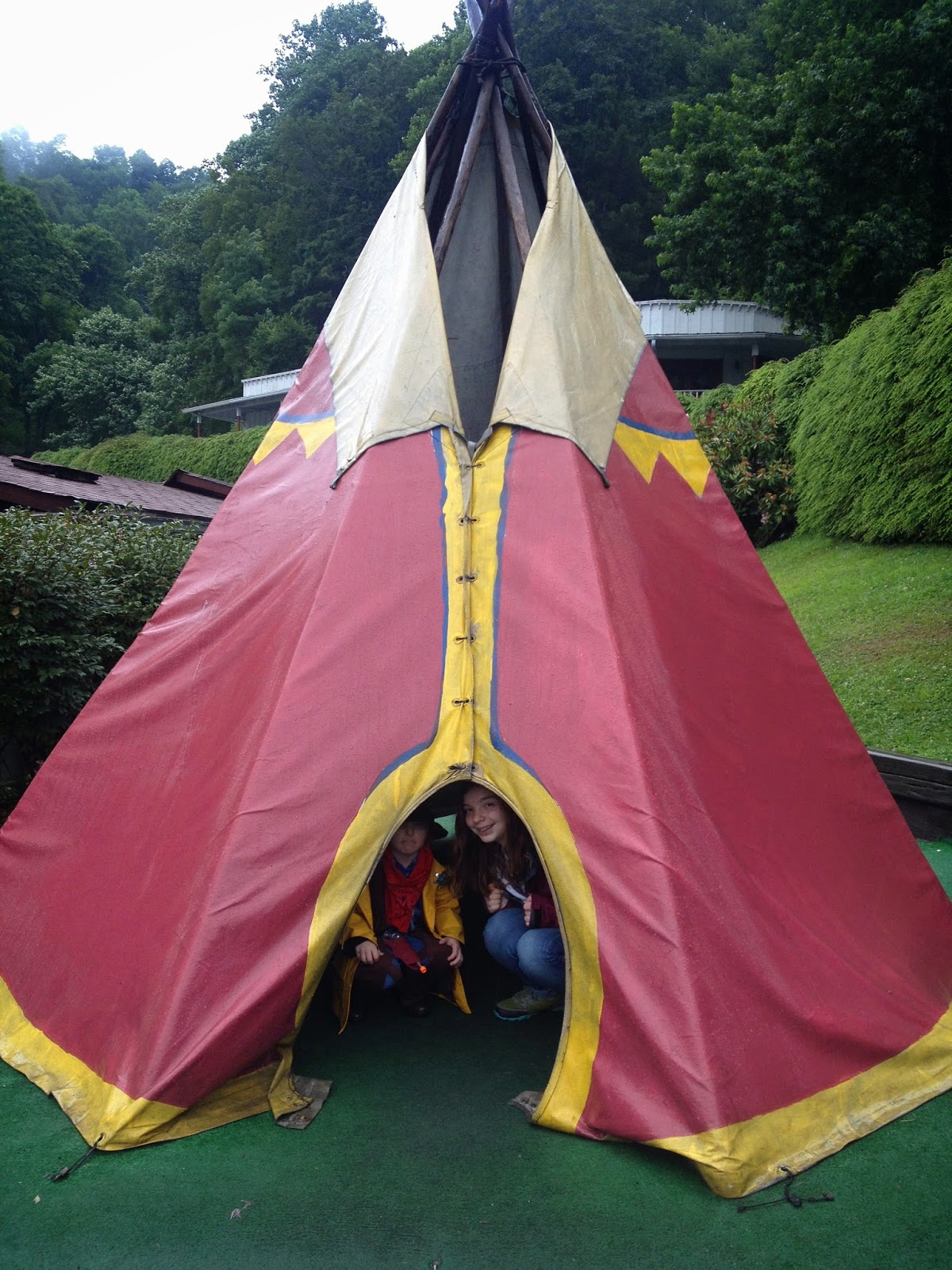 We gem mined, rode rides and went to the petting zoo (Phaedra's favorite part). She also loved the shooting game. We were quite a sight all piled in the tilt-a-whirl laughing our asses off. We rode till the old parents were nauseous. 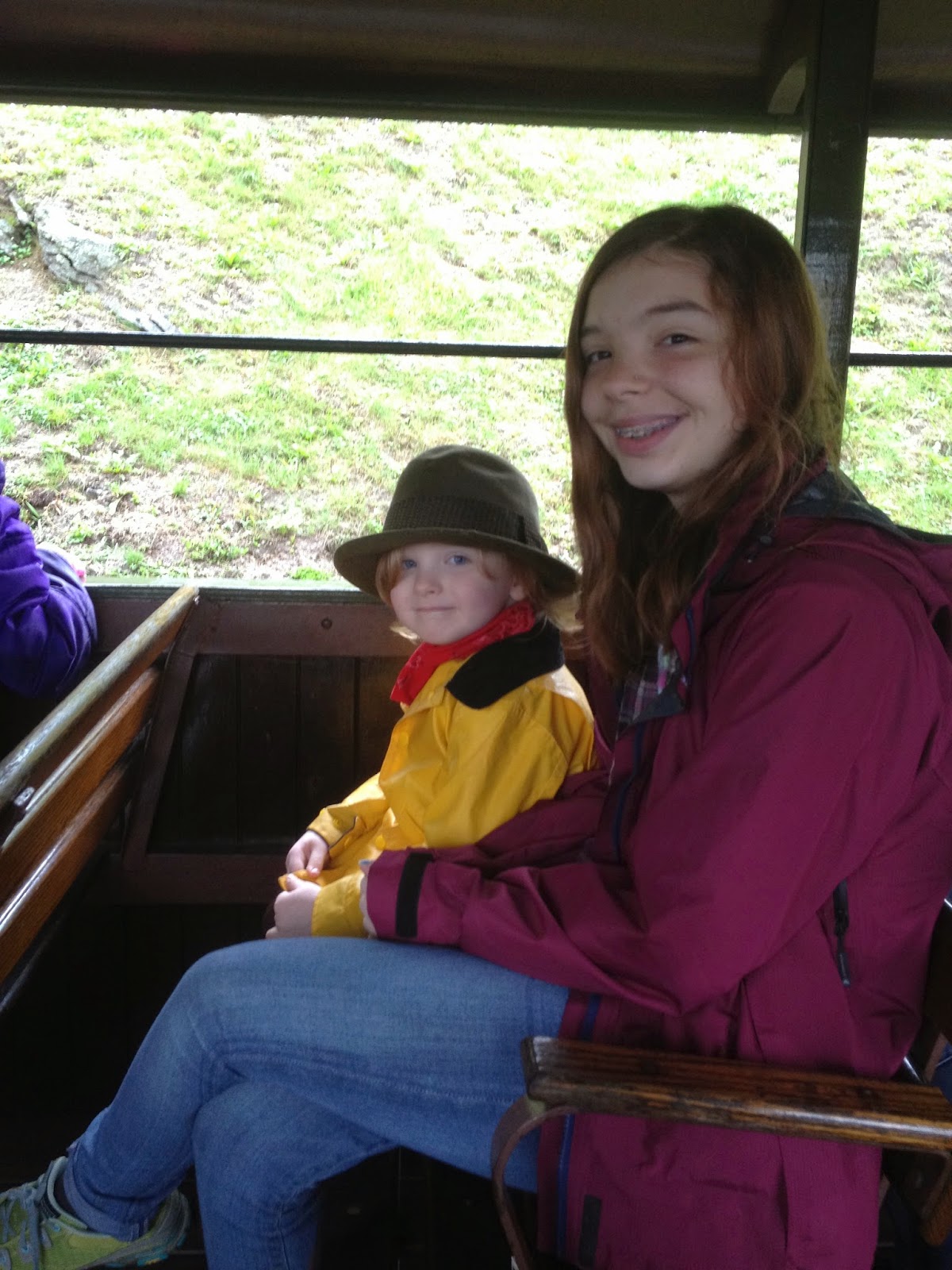 we rode the train 3 times! 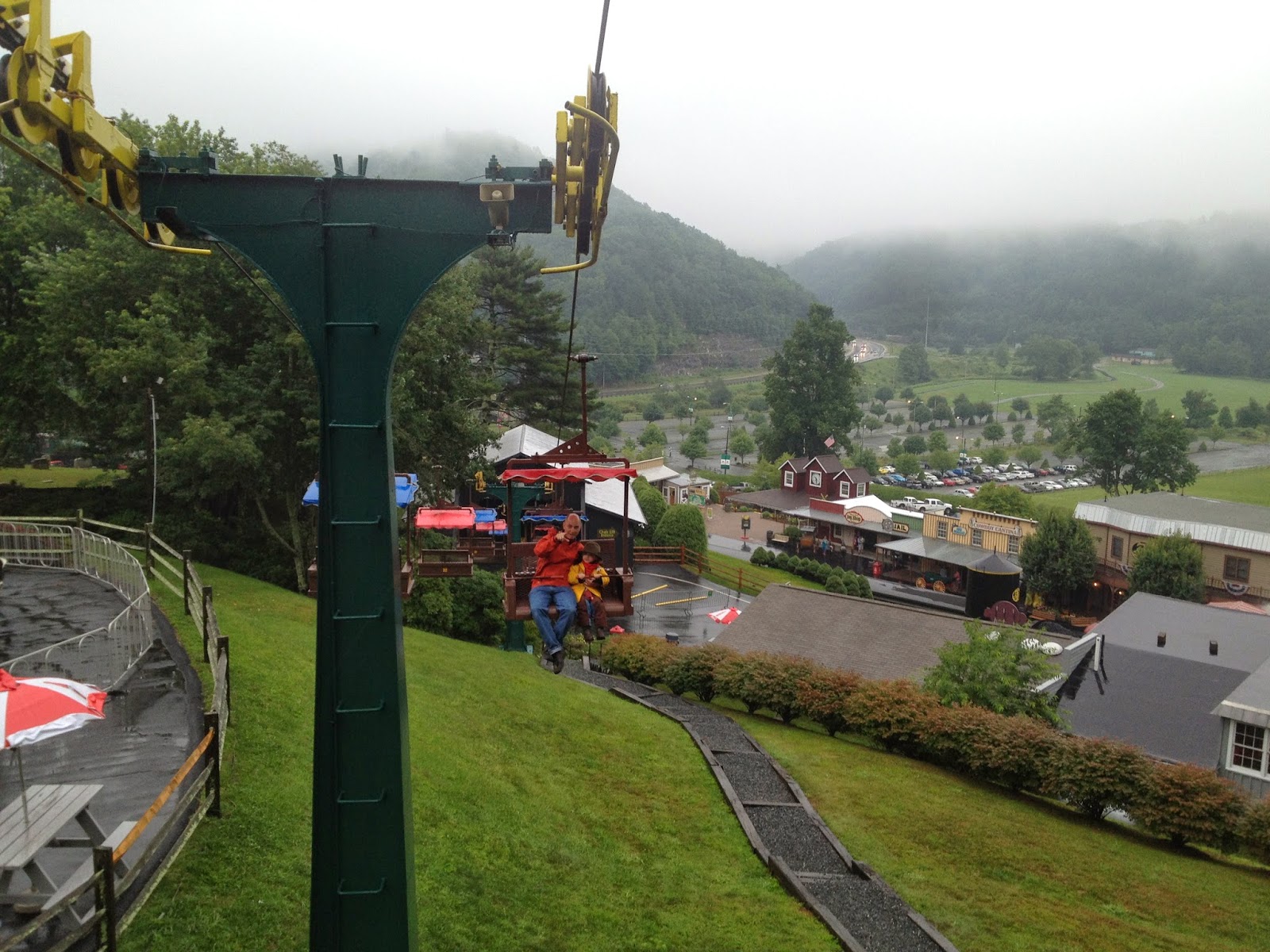 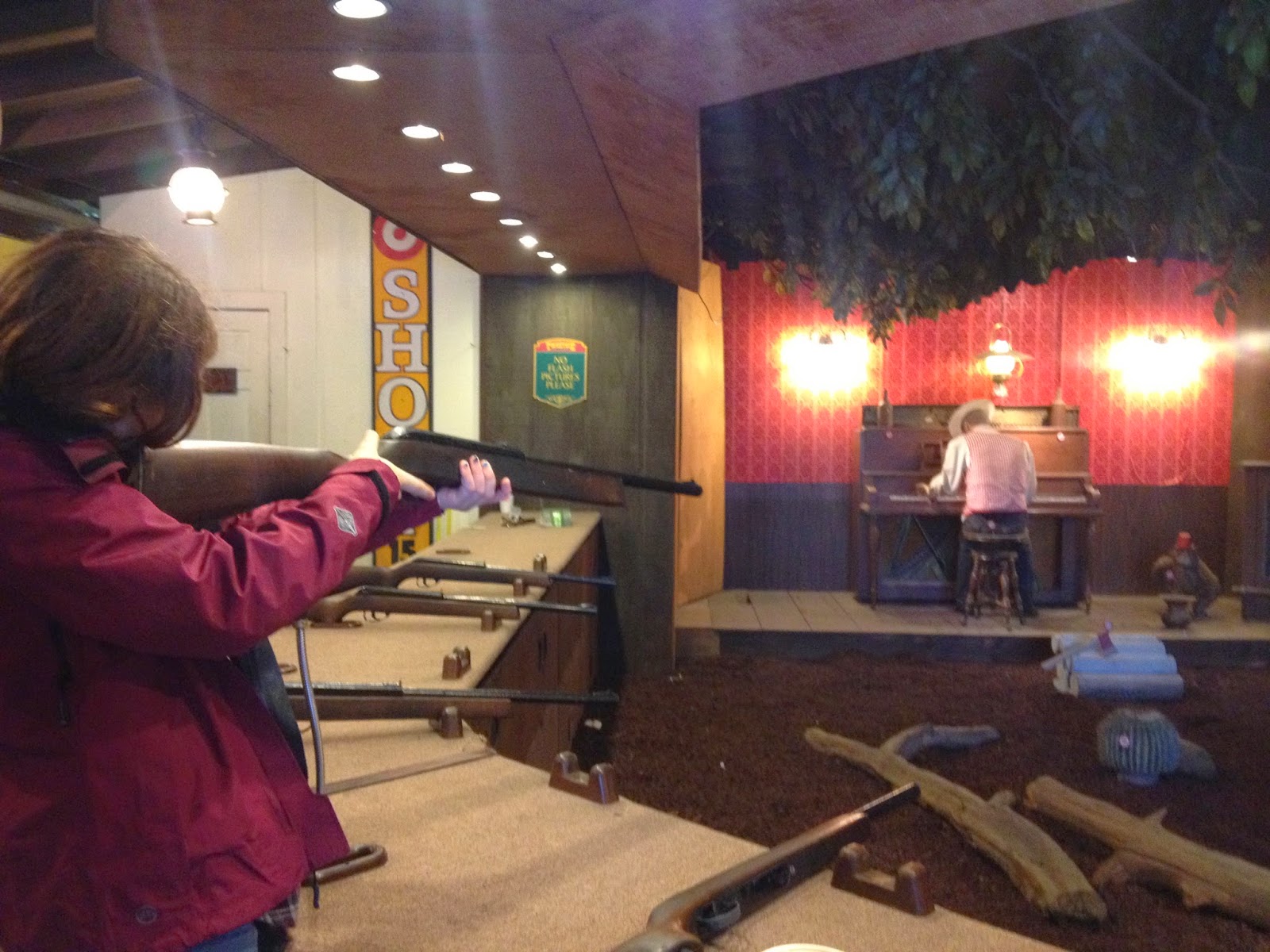 We watched every show- which was Dresden's favorite part. When the Can-Can girls would walk by, Dresden would tip his hat and say "hello ladies". He obviously has a calling to work at Tweetsie one day, so we have to move back before he is old enough to get a job there. Good to know Theatre genes are passed on. With Theatre parents, he had no hope but to fall in love with the stage. 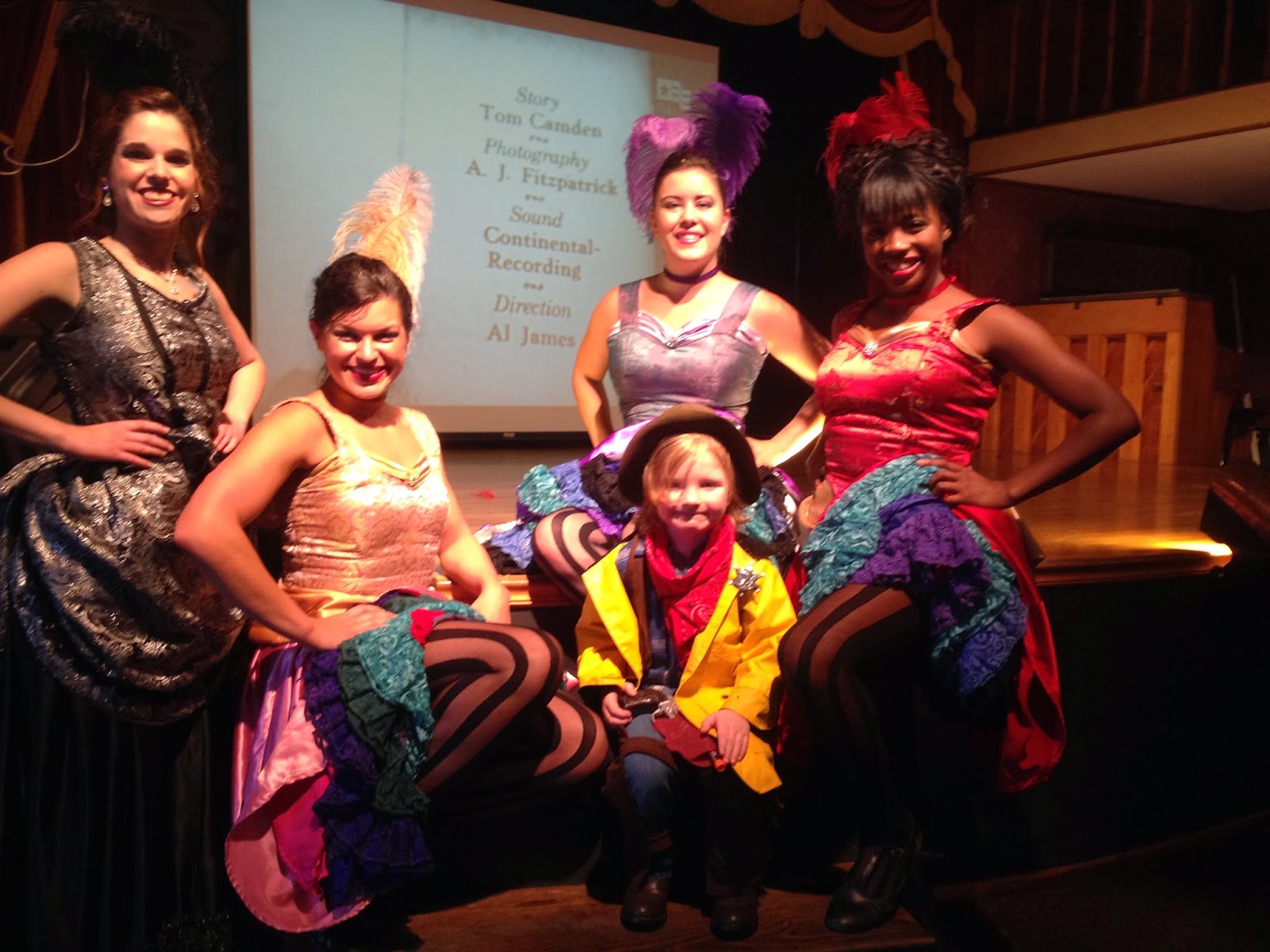 Dresden and the Can-Can girls at the Palace 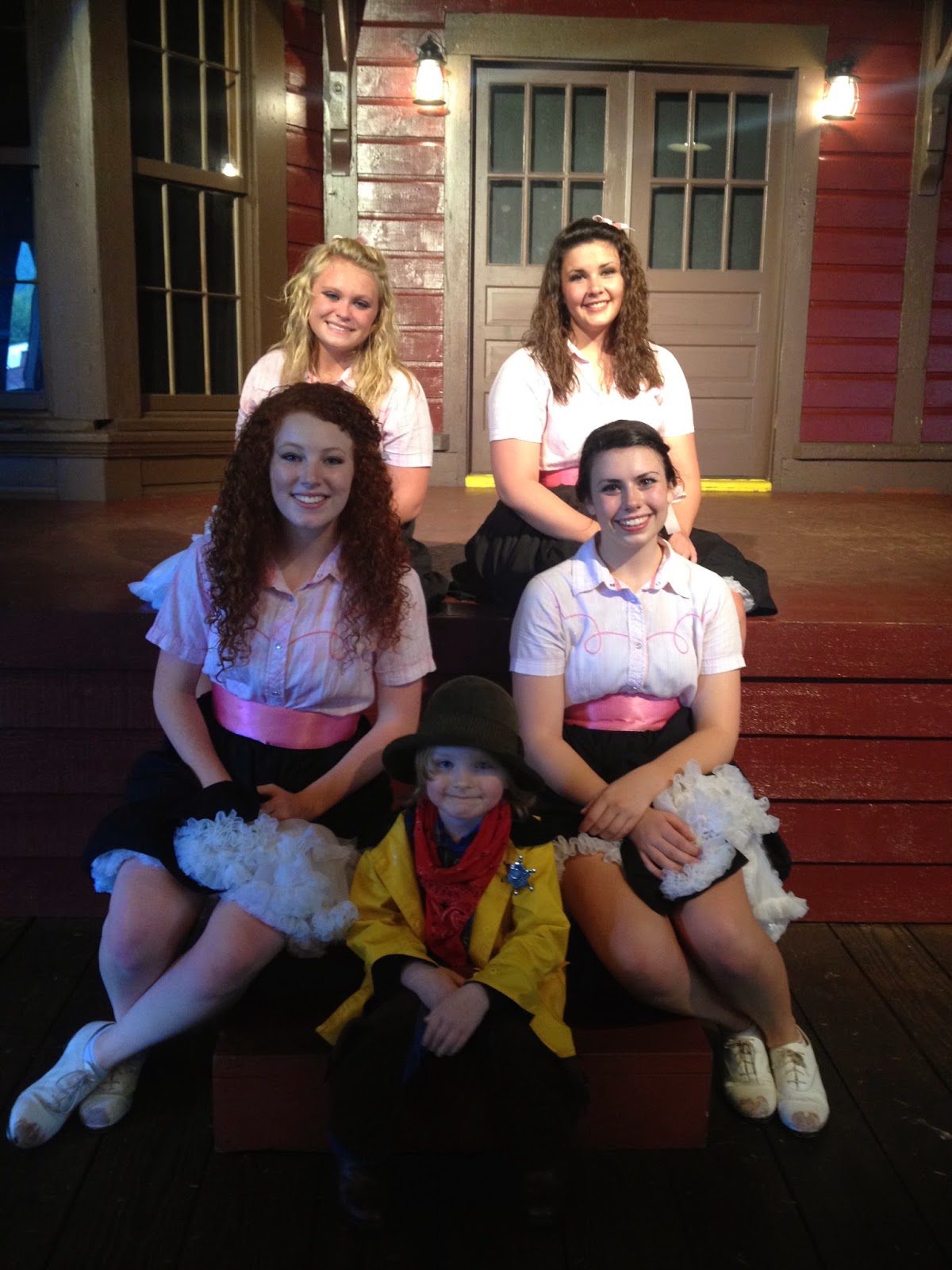 Dresden with the cloggers

We spent 10, yes TEN HOURS at Tweetsie. In the rain. We win Best Parent Awards for sure. 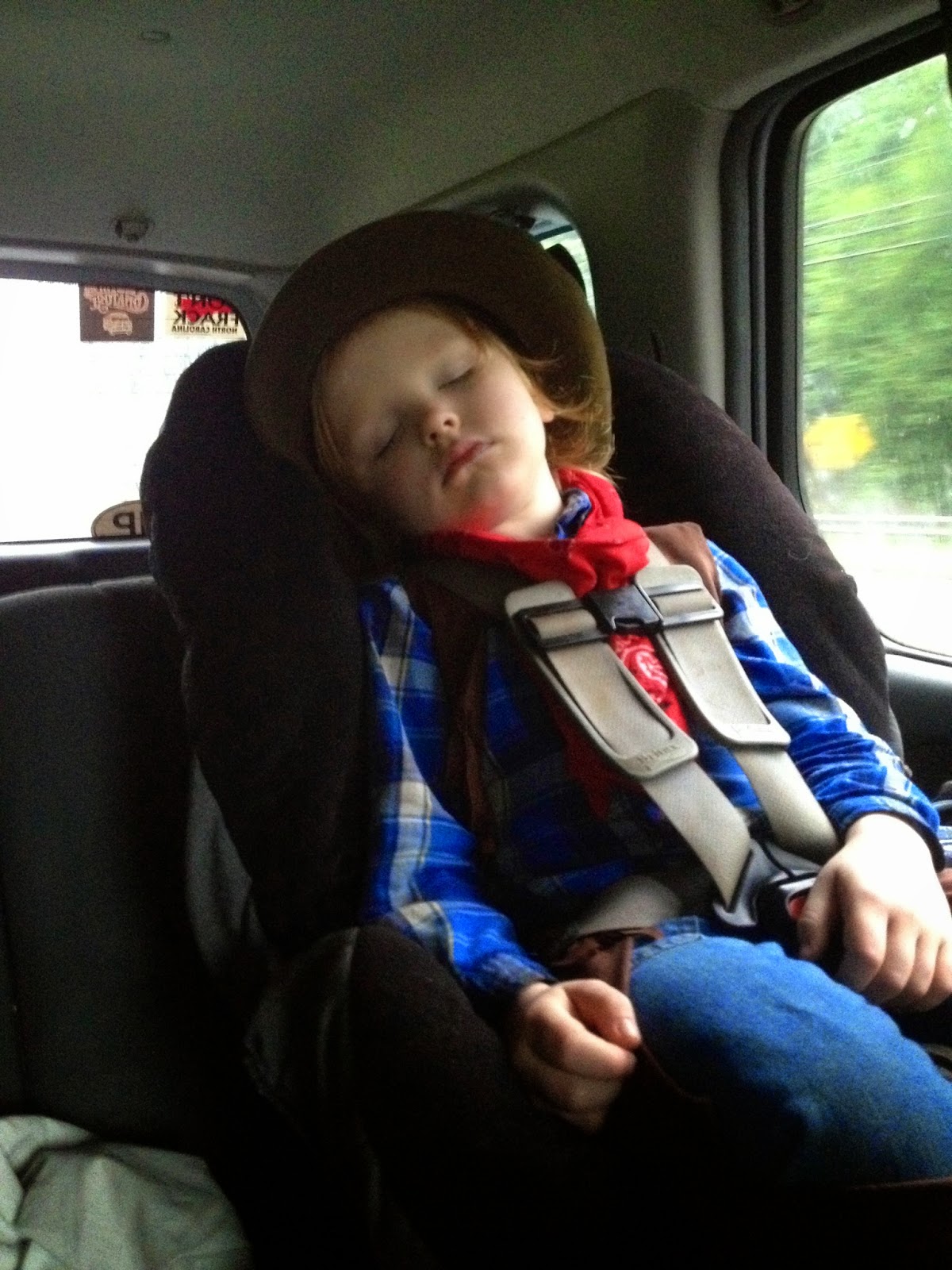 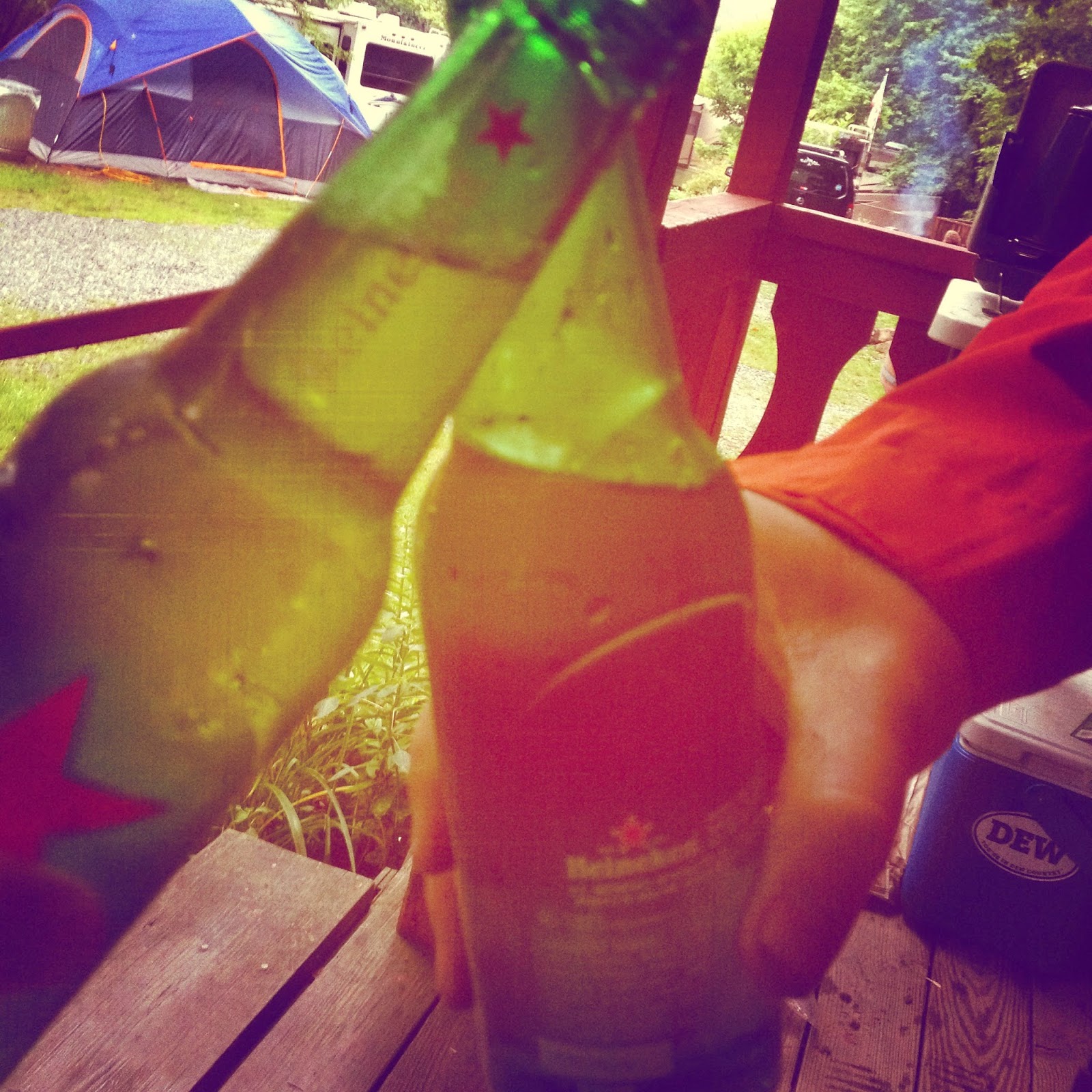 We spent our last night around the fire (because, of course, the skies cleared up as soon as we left Tweetsie) with Dresden playing his new Cherokee made drum and chanting. (He also spent ALL of his Birthday money on souvenirs including real metal spurs that jangle when he walks!) Our dinner was pineapple habanero pork tacos with fresh garden salsa! (My camp specialty) There was a small band playing in the campground common area and we made friends with our camp neighbors. 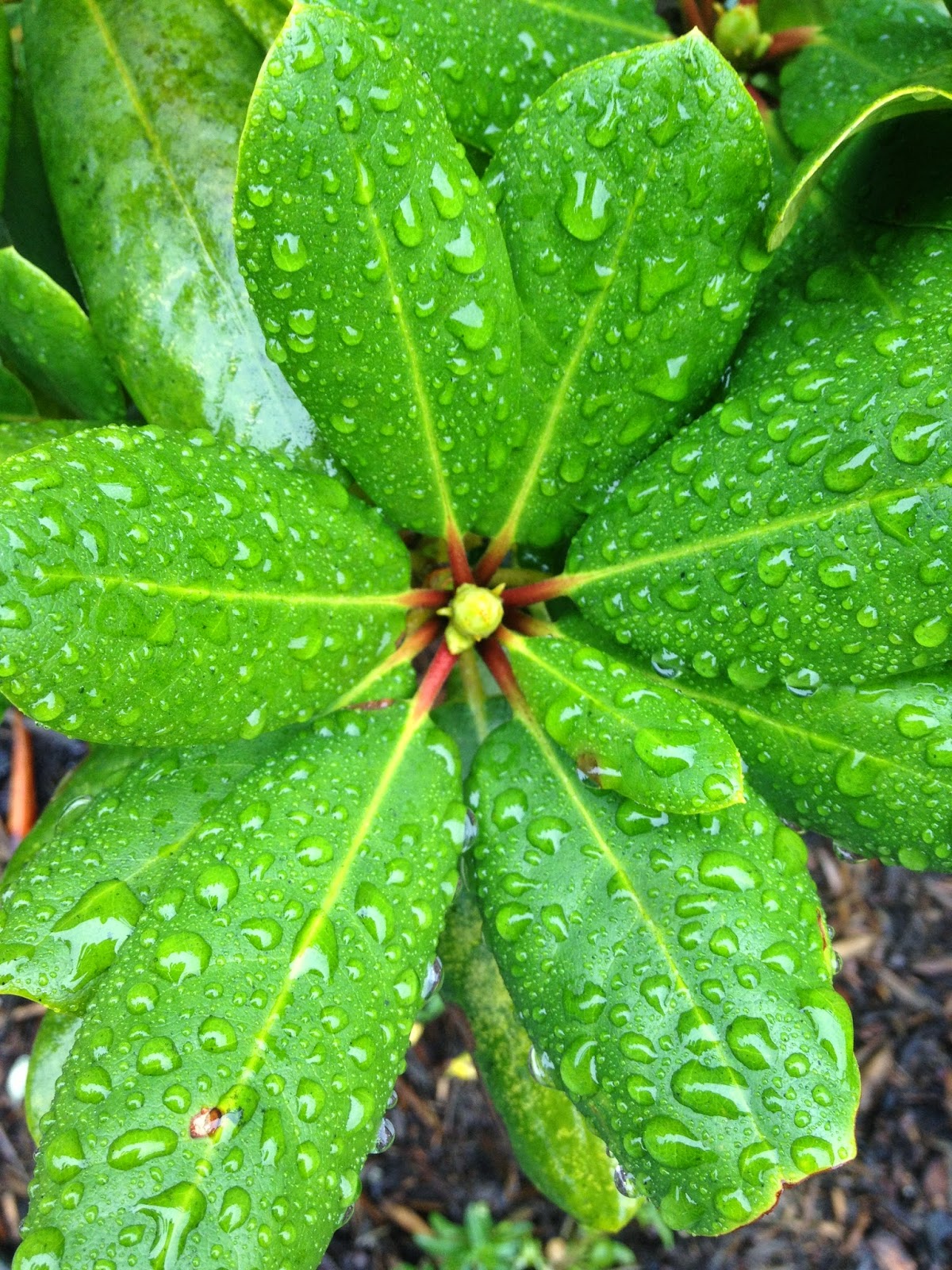 Rhododendron in the rain. That means mountain summer.


Posted by Sarah Stormie Campbell at 8:21 AM 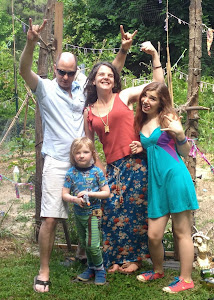